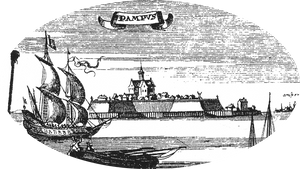 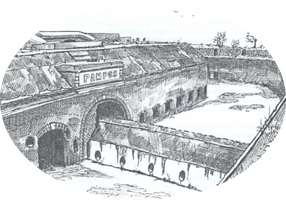 In the spring of 1997, a year after I left the Royal Navy, I met a former neighbor of mine who asked me to go with him once to the Fort Island of Pampus. According to him, it had to appeal to me given my military background. Of course I had heard of Pampus and had seen it many times when we cycled along the old Zuiderzee dike because then you can see it in the distance. He told me he was a guide there and thought I would be interested because, in his opinion, I had nothing to do now anyway. I really wasn't bored because of the various hobbies I have. But he had made me curious. No sooner said than done. I went with him once on a Wednesday (which was his guide day).

Once on the island, I had never seen such an impressive mess. After walking with him a few times during his tours that day, I was sold. I loved it. The rapport among the volunteers and between the (then brand new) fort watchers was also very good. You were sort of included in the Pampus family. That really appealed to me. Now, twenty-five years later, I still have that feeling. Otherwise, of course, I would never have lasted this long and I intend, as long as health permits, to do this for a long time to come.

I then immediately volunteered at the end of that day with the intention of guiding there. Over the years I became involved in other things as well. I became very interested in the history of Pampus so I regularly dive into the various archives where I have found some things and am now the "Pampus historian". Because I saw in the beginning that there was no model of the fortress (which I expected) I started building one at the end of the season (see further on this page).When that was finished I started writing a "Handbook for the Pampus Guide" the following year. That has since become a loose-leaf book of nearly three hundred pages.I did that because there was actually very little information available for the guides such as a booklet about the fortress written by Cees PFeiffer (co-founder of the Foundation Fort Island Pampus) which was also available in bookstores at the time and a booklet about Pampus written by Jan Moelker which was no longer available in bookstores at the time.

Now I have also been a guide mentor for several years. This means that I train and guide new guides until they are ready to guide independently. The aspiring guide then walks with me or with other guides a number of times to learn the "trade" and when they themselves think they are ready for independent guiding they take an exam in the form of independently guiding a group with me as a "guest observer". Afterwards we discuss what went right or wrong. As a result, the person in question can either guide independently or not for a while. The latter rarely happens. 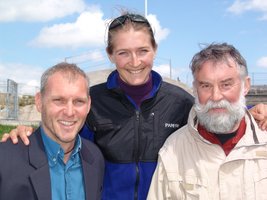 From spring 2004 to spring 2006, in addition to volunteering, I was a member of the Pampus Management Team as Manager Walbasis. Later I also became involved in providing information in the fort in the form of information boards in the main areas of the fort. At that time there was not much information available other than a small sign here and there with a brief text about the room in question. And what I also enjoy doing is making Powerpoint presentations about Pampus and all kinds of events that take place on Pampus. I then present these to my own people but especially to third parties. There is regular demand for this.

Since the spring of 2014, I was elected president of the Volunteer Council. I stepped down from that in the spring of 2020 because I then served two three-year terms as president and according to the rules, I am then not allowed to run for re-election.

I am currently working (off-season) with a few more volunteers to set up a historical collection. That's quite a job. For there is quite a bit collected and donated over the years that all needs to be charted.

Become a volunteer on an uninhabited island 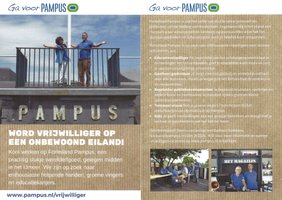 We can still use volunteer guides, hostesses/hosts

Transfer of the Pampus maquette spring 1998

Transfer of the model to the fort watchers

Joint photo below Claude Murray, the P-38 pilot who was hit near Nijmegen in late 44 and had to jump out of his burning plane at Pampus.

This is what the island looked like over a hundred years ago.

If you click here you will start the presentation in which you can see how the model was built.

Cross section of the turret and a few of its parts

Cross section of one of the two gun towers on Fort Island Pampus. In the middle a cross-section of a gun tower drawn by Henk Tol, a volunteer at Fort IJmuiden. Unfortunately, there is nothing left of it now. To the left of the 2 towers an animation of one of the two turret brakes and to the right an animation of the accumulators that provided constant pressure for the hydraulic systems in the turret, such as the elevation of the cannons, the boosters and the turret brakes. On the far right is one of the two boosters, which pushed the heavy shells into the gun barrel.